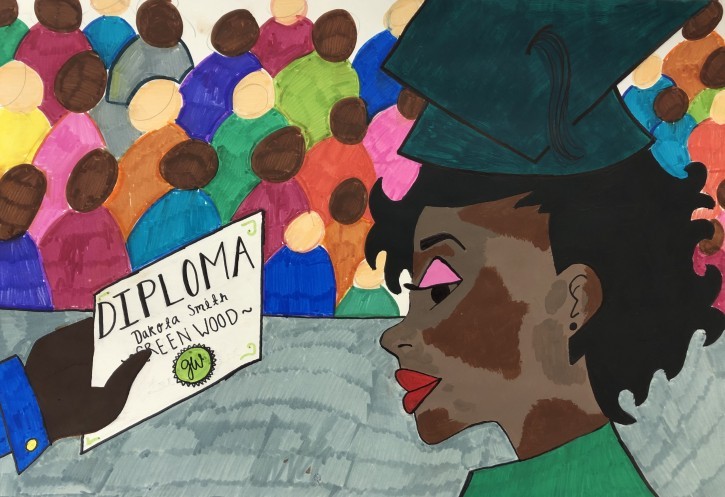 Your #Panel61 by Eiva Richer

The Great Migration has affected American communities by opening doors for more opportunities to flourish for all types of minorities within this community, especially the African American minority in America. I chose to paint an African American female walking across the stage and getting her diploma because it shows how far these minorities have come; from having no education to graduating college with multiple degrees. In the eyes of today compared to almost 150 years ago, a lot has changed and that change has allowed for every person of color in America to have a chance to get an education and succeed. If the Great Migration wouldn’t have happened then families wouldn’t have had the mindset to want better for their children and a time of longing for an education wouldn’t have happened, resulting in a minor setback of the start of something brand new and great. The education where they moved was much more advanced and inclusive for African Americans to the point where they decided they wanted to pursue more and no one was there to tell them they couldn’t. It allowed for them to expand on their knowledge and make something of themselves. That mindset eventually became passed down and encouraged future generations to continue the path down something great. When the Great Migration happened it allowed for people to finally open up and explore their talents and find out for themselves what they could do instead of someone else telling them what their future looks like, they could now decide that for them and no one else. In conclusion, this painting represents the path of struggle they had to take just to get a sliver of education but now since times have changed, they can now be handed a high level education without being restricted and they can take that education and make much more out of it.