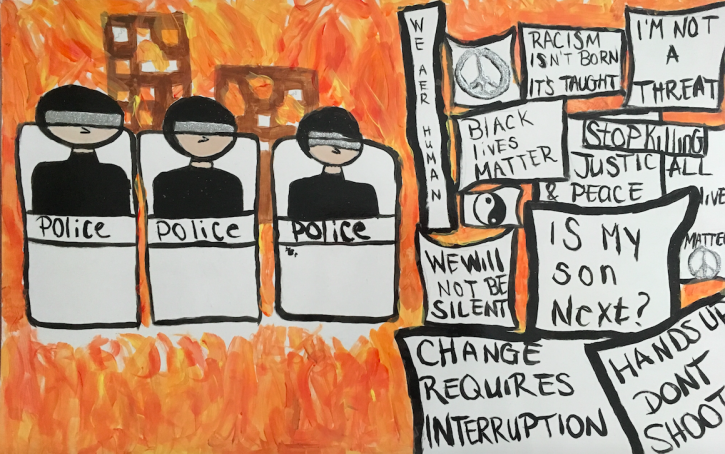 Your #Panel61 by Gamael Jean-Francois

My painting depicts the Black Lives Matter protests, fire, and police officers. The reason I did this is because, in this day and age, this has been becoming a big issue among the American public. All of the posters and the picket signs tell a story; a lot of them are questions from people, asking if their life is at stake or their friends and family will be safe. Since the Great Migration, the ongoing relationship between blacks and whites has continued to be tense. Racism has never ended and probably never will - it’s nothing that can go away just like that. It’s something that’s an ongoing thing like a living virus in the system.

My image includes fire, chaos, picket signs, and police officers to depict the way in which racism and the way in which people are treating each other is causing mass outbreaks around the country. There have been many instances of white people killing blacks such as police brutality or mass murders like a white man coming into black church and killing indiscriminately. These acts fuel the fire. People are angry. Many of them are protesting against the brutality, the unfair treatment, and America’s day-to-day acceptance of these acts. In the end, we are all humans. We all share the same planet and we should live together in harmony although this may be a distant aspiration.