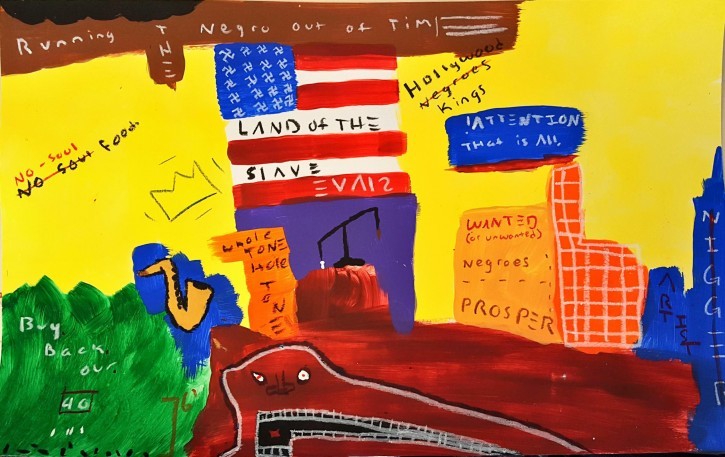 Your #Panel61 by Jared T. Ross

My work is essentially a collage of African Americans’ relationship to and affect on the US during and after the Great Migration. In the center, the symbolic scale of justice is manipulated to indicate a favoring towards whiteness and a hanging of blackness.The saxophone pays tribute to black people’s immense contribution to music through their jazz and, subsequently hip-hop. Along the top, the black “cloud” represents the incoming storm of black people that would spread across the country. Also on the top is the phrase “Running the negro out of time,” which is representative of many white people’s desire to drive colored people out their cities. In the bottom left, the text and green are symbolic of the land once given to blacks, but then shortly taken away from them and the effect that had on the futures of those black bloodlines.The face at the bottom of the piece illustrates popular white opinion during and now after the Great Migration. It indicates that initially, white people were overtly racist and against black integration but over time (albeit some still are open about it) their anger has been reduced to biting their tongue on the matter. The crown to the left of the flag is a symbol commonly used by black 1980’s artist Jean-Michel Basquiat. Basquiat paved the way for future black artists in America and spearheaded the Neo-Expressionism art era. A theme very prominent throughout the work is redefining black roles in society-illustrated by the crossing out of certain phrases and words.