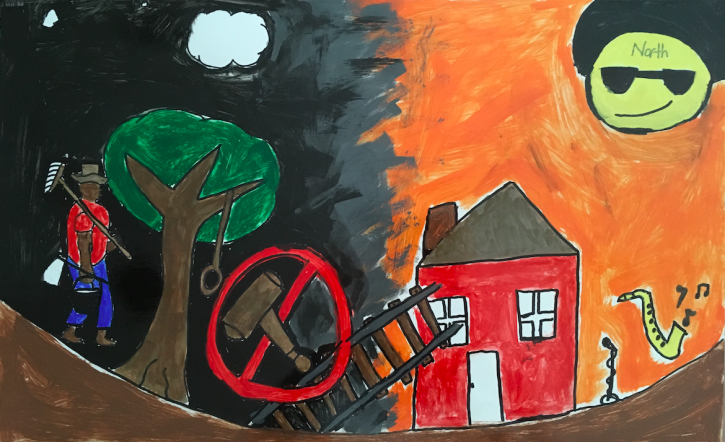 Your #Panel61 by Sean Proctor

I chose to do my painting on an evolution/transition from the South to the North.  It depicts some of the things African Americans encountered along the process. To start, there is a black laborer who represents the move from slavery to continuously poor conditions in sharecropping and other forms of work. The tree has a noose for the hate crimes that still haunted blacks in the South. Also, the sign with the gavel is for the injustice and how the justice system was of no help. The train tracks helped them travel to get to the north and represents the growing work industries for work up North. Once in the North, blacks enjoyed the better housing and mixed culture shown through the music instruments and house. Finally, the mood and quality of life is shown through the sky and background. In the South, it was a dark and saddening place. As you get towards the middle it gets lighter until you cross over to the bright and more inviting side of the North which even features a smiling sun with the popular black afro.