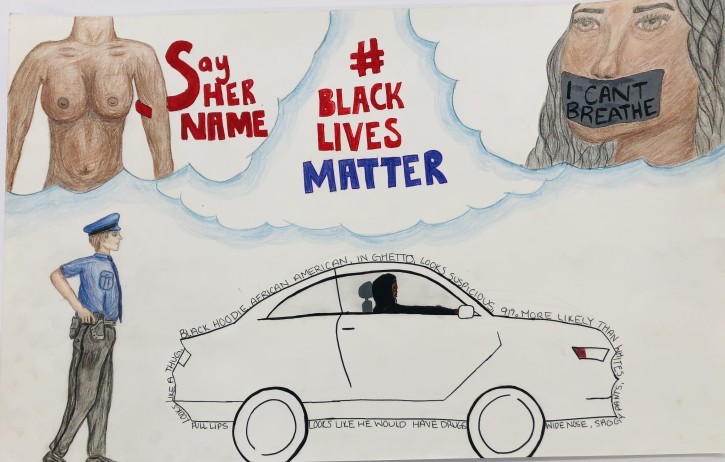 Your #Panel61 by Sophy Ingram

My panel is a sort of mix of the different movements that have come about from police brutality. The Great Migration had many impacts on race relations in the United States today, police brutality being one of the larger ones. I wanted to depict this in my Panel61 because it is important to demonstrate the negative things that have come about from the Migration on white people’s part. To be able to prove the theory that we do not end discrimination, but merely adjust it and make it more contemporary is truly a shame and I thought it was important to portray. Although the Great Migration has brought many miraculous ideas, objects, and much more, those are the things that are always talked about in a positive manner. This is a good thing, but more racial problems were also brought about which need to be addressed, which is why I added the different movements that have arisen. I portrayed the “I Cant Breathe movement, the “Say Her Name” movement, the “Black Lives Matter” movement and I highlighted the concept of police brutality and stop and frisk through the centerpiece of the work. The movements are in clouds for two reasons. One is because they are the product, the things that have arisen from police brutality and two because clouds/ thought bubbles typically represent something that we think/want to happen, and in this day and age, we want the change, but it is a mere vision at this point in time.