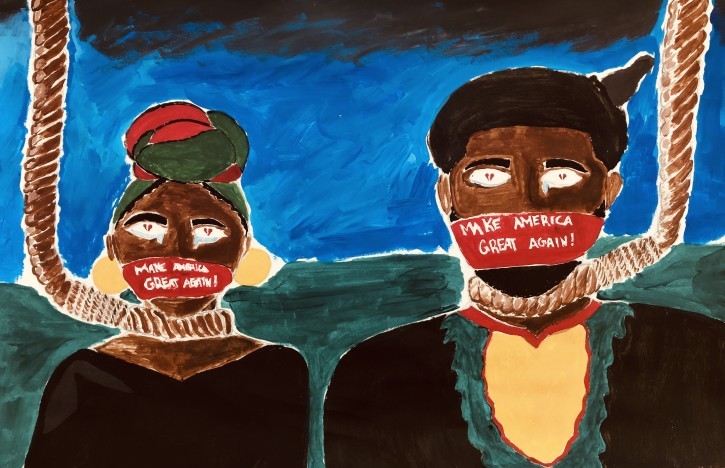 Your #Panel61 by Courage Moore

My panel61 is controversial to some and plain as day to others and could also be classified as a bigoted description of a culture. There is no right or wrong, it’s how you perceive it and choose to interpret it. But on the other hand if this offends you then it has reached its desired goal. Due to an event called the Great Migration, which was a mass migration over a time period of African Americans, many things occurred positively and negatively. There was a interbreeding of cultures, with different foods, clothing, music - the Harlem Renaissance even took place during this time period. However, there is a dark side to this story. When many African Americans moved, they were not greeted with open arms. Many people hated the idea of black people being their neighbors, sharing the same type jobs they had and even having their kids attend the same schools. African Americans were kicked, beaten, lynched, burned, tortured, falsely detained, shot, hosed, looted, mutilated. Those times have trickled down to the now and even though it hasn’t been that extreme it has taken a different face. People need something to rally behind to help them feel important and to have their views acknowledged. The slogan “Make America Great Again” has been that rally point; in recent years people have spoken those words in pride for it should be but at the same time others have cowered in fear. For some, it isn’t about race but about pride while for others it is just like wearing a hood. They ones who abuse this slogan gather in the mass to intimidate. African Americans are the backlash of these oppressions. We as a people yet endure another era of harsh treatment and unfair standing. We will endure like we always have but the weight does get heavy to a point. Nonetheless, we have to keep moving on.